Once you have a firm diagnosis, the texts mentioned here are useful in finding the trigger points and understanding what factors cause them. Included in the books is useful, everyday advice on what actions or positions to avoid so you don’t re-activate the trigger point and thus the pain cycle. Clair Davies’ books are particularly good. For example:

I also recommend Sharon Sauer and Mary Biancalana’s book on self-treatment for lower back pain: 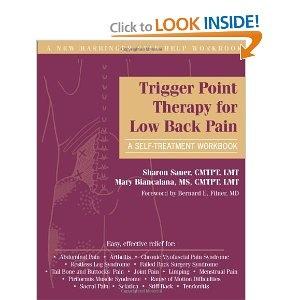 In addition, the website of the NAMTPT (National Association of Myofascial Trigger Point Therapists) has a great *free* feature called the “symptom checker.” This allows you to see common areas of pain and the trigger points (and their locations) which are most likely the cause.

To release a trigger point yourself, you will need to use your fingers or some sort of compression tool. Such tools include a Backnobber or Theracane: 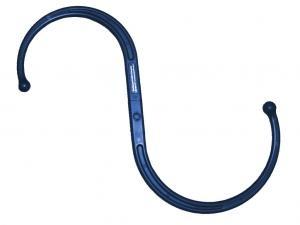 You can also use a simple tennis ball or racquetball.  No expensive tool is needed; some just reach “difficult” spots better.  You can also put a tennis ball in a sock to use as a compression tool against a wall.

The trigger point is suffused with muscle-fatigue chemicals and pain chemicals, which lock the affected fibers into a state where they can’t contract or expand properly. With tools such as your hands or the Backnobber, you are trying to direct blood to the trigger point. What you are not trying to do is “break it up” by rubbing across it. This can, in fact, bruise and/or irritate it.  A myofascial trigger point is not the same thing as an adhesion or scar tissue, although sometimes they coincide.

Presuming the trigger point does not include much inflammation, swelling or an entrapped nerve, here is what I’ve found works best: